Full program of Julia en la Onda with Julia Otero. We start with «Mesa de Redacción» and continue with Ferrán Monegal, with whom we review the highlights of the television grid. Then, with Raquel Martos and Pedro Vera, we analyze the current political situation in a humorous way. The price of electricity in the wholesale market breaks records again and we discover the reasons in «El Orden Mundial». In addition, we interview the Kellys, who present an initiative to put an end to job insecurity. Are siblings going to become a privilege of the upper classes? We debate it in «El Gabinete».

Julia on the wave

Since 2016, the program also incorporates new sections that are becoming pillars of the format: international political news as seen by El Orden Mundial, the verification of the informative reality of the hand of ‘Maldita hemeroteca’, the masterclass, with reputed referents of different subjects, such as the paleontologist Juan Luis Arsuaga, or the look of the journalist Borja Terán with his TV stories that radiograph how we are as a society. Also participating are the inventor Pep Torres or the correspondent of Onda Cero from New York Agustín Alcalá.

The presenter Julia Otero announced Wednesday that she has overcome the colon cancer that was diagnosed last February and that forced her to temporarily leave her radio program on Onda Cero, ‘Julia en la onda’, in the hands of journalist Carmen Juan.

Through a message on Instagram, the broadcaster has explained that she feels «alive and warrior» and has presented a new ‘look’ with which she has confirmed her imminent return to the radio waves. «Weakened hair was asking for (a cut). And yes, thinner. I would tell you the diet so successful, but almost better you never try it,» wrote Otero, who has advanced that it is «not long» before his return to the radio. «I’m waiting for permission from the white coats,» she said, referring to the doctors.

Full program of Julia en la Onda with Carmen Juan. After the «Mesa de Redacción», we review the highlights of the television schedule with Ferrán Monegal. In «Big Van Science» we discover what a Brain-Computer Interface (BCI) system is. Also, we analyze the political news in a humorous way with Raquel Martos and Pedro Vera. In addition, we are visited by the singer Dani Martín, who presents his new album, «No, no vuelve». Finally, in «El Gabinete», we discuss how affective and sexual relationships have changed during the pandemic. 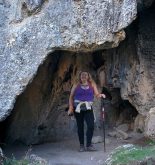